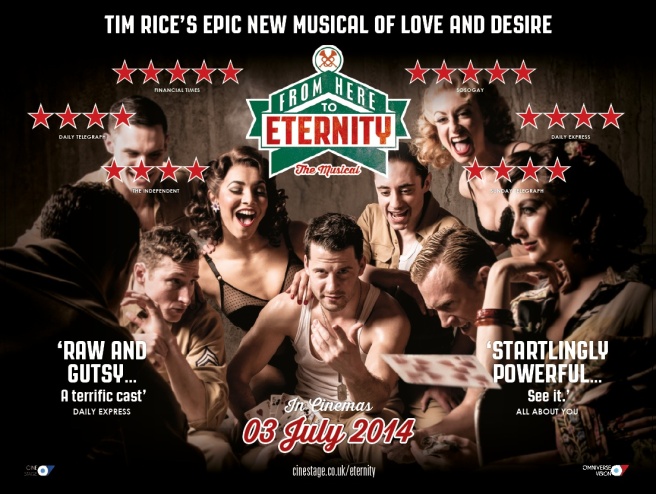 On the 3rd July something spectacular is going to take over a cinema near you… so be prepared for a musical like no other! Welcome to From Here To Eternity!

Based on the classic James Jones’ novel of the same name, From Here To Eternity takes you back to the year 1941, where many people believed that the safest place to be, furthest away from the already raging war in Europe, was Hawaii. Following an American military base in the lead up to the attacks on Pearl Harbour, we are not only invited into the lives of the G Company soldiers, but more intimately four individuals, who ultimately fall in love with people they really shouldn’t have!

It kicks of with a malihini, which is the Hawaiian term for an island newcomer, named Private Robert E. Lee Prewitt (played by Robert Lonsdale), who we learn is not your average soldier. For me, he stood out the most, not because he is effectively the lead male, but because of his absolutely phenomenal vocals! I am a huge West End theatre geek and I knew, as soon as I heard ‘Fight The Fight‘, that I needed the soundtrack to this musical in my life. I just have to find out where I can get my hands on it now…

Siubhan Harrison, who in my eyes plays the lead female, compliments Roberts vocals beautifully in her portrayal of Lorene, a kind-hearted woman caught in an unescapable situation. Another cast member who I feel also deserves a mention is Ryan Sampson, whose character Private Angelo Maggio, provides the majority of the comedy – it would certainly have been a different musical without him!

The staging was great as well, as you weren’t focused on the set changes one bit, so without realising, you’d seamlessly entered new rooms and scenes! There were also fantastic slow motion scenes throughout, which the incredible cast made look like a piece of cake… although I’m sure it’s far from it!

Even though this isn’t your typical “feel-good” musical filled with daisies and sunshine, it certainly leaves you thinking about what these men had to go through, especially in relation to the recent 70th Anniversary of D-Day. I left this special cast and crew screening wanting to meet and thank the brave soldiers (both survived and passed) for the sacrifices they’d made in order for us to have the world we do today.

Tim Rice’s incredibly timeless musical is set to play in over 250 cinemas across the UK and Ireland. I highly recommend catching this film, especially if possible at a Cineworld as you’ll be given the opportunity to purchase the glossy programme as if you were at the theatre – I can guarantee you won’t be disappointed as it’s packed full of history, exclusive interviews and amazing photography! I must admit, halfway through the show I was so drawn in that I’d completely forgotten I was in a cinema screening, as opposed to a theatre! Don’t get me wrong though, I LOVE West End theatre like there’s no tomorrow, so I’d never want it to be replaced, but it did leave me with this thought – “welcome to the future of affordable musical theatre for all to enjoy”…

NB: words not written or at all edited by a third party – these are my own views and opinions, no one else’s.

One thought on “From Here To Eternity Review”

🐍 Did you know, there are more than 3,000 species of snake on our planet?⁠
📖 MONDAY MEANING 📖⁠
🦂 Did you know, scorpions glow under ultraviolet (UV) light as a result of special chemicals found in their exoskeletons? ⁠
🔊 SHOUT OUT SATURDAY 🔊⁠
🐒 Howler monkeys are famous for... well, howling! Their throaty calls can be heard from as far away as 5km, which is ideal for letting other troops know to stay away from the trees they feed on.⁠
⏪ THROWBACK THURSDAY ⏪⁠
🐬 Did you know, killer whales are actually dolphins?⁠
💡 TOP TIP TUESDAY 💡⁠
🦎 Did you know, the alpine newt has an unspotted bright red or orange belly?⁠
📚 SUNDAY READ 📚⁠