A few days before it was released in UK cinemas nationwide, I was invited to Disney’s FDA Multimedia Screening of the hotly anticipated Tomorrowland: A World Beyond, in London’s Leicester Square Empire IMAX!

If you haven’t heard of this film yet, you must have been stuck under a rock somewhere. Not only is it brimming with star quality performances but it’s got amazing special effects, the creative design of the future world is super cool and most importantly, this film carries a couple of very important messages. I’m just not too sure it’s going to be powerful enough to reach everyone… 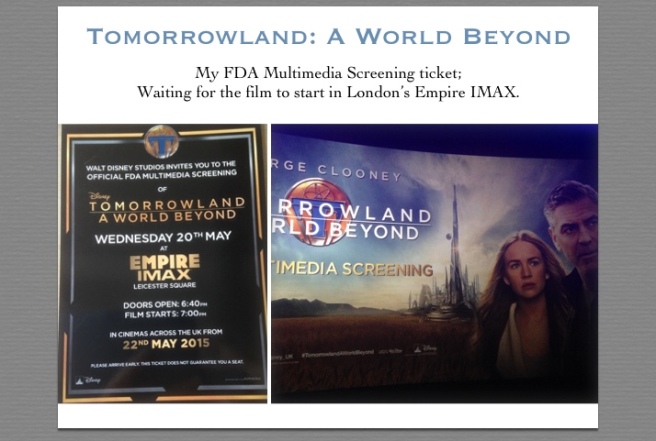 When I arrived, I was greeted by a red carpet and hordes of fans packed around the cinemas entrance. Bemused, I double checked my ticket to make sure I’d gotten the correct venue and indeed the correct day… but I hadn’t been mistaken. I knew it couldn’t have been the Tomorrowland European premiere as this had already taken place the previous Sunday, so I decided to wait around… to see who went in, of course! A couple of glammed up women went in first, who unfortunately I didn’t recognise (sorry!) but then I spotted motorbike enthusiast, world explorer and presenter of the Long Way Round programmes, Charley Boorman. My family and I are huge fans and thoroughly enjoyed watching all of the crazy adventures he’s been on with Scottish actor Ewan McGregor, so that was quite cool to see him.

And then I could hear a cluster of cheers and screams to my left. Randomly (or so I originally thought) it was Baywatch and Knight Rider actor, David Hasselhoff shuffling down the red carpet. It looked like he was really taking the time to stop and talk to as many people as he possibly could, which was nice to see. I thought at first that maybe he might have had a cameo role in some sort of futuristic getup but alas, this was not the case. I have only recently found out that he was actually there for the premiere of his own TV show, Hoff The Record, which airs on Dave later this month.

But anywho, back to the film I’m actually reviewing! I went in and nabbed the best possible seat that would provide me with the greatest experience. But before the film began, we were treated to two exclusive new trailers for Marvel’s Ant Man (due to hit UK cinemas 17th July) and the one that everyone’s been raving about, Star Wars: The Force Awakens (due to hit UK cinemas 18th December). Don’t hate me, but I wasn’t that fussed by either of them – that said, I’d still like to see Ant Man just incase the trailers haven’t been doing the film justice.

So without giving away too many spoilers, this film begins with a really detailed flash back to Disney’s 1964 Tomorrowland; a recreation of the original Tomorrowland found in Walt Disney World Florida’s Magic Kingdom, which opened back in 1955. This is where we meet young Frank Walker (played by 12-year-old Thomas Robinson) and his awesome gadget, that he wishes to submit for the New York World Fair. From this point onwards you are treated to an action-packed two-hour special-effect extravaganza, with inspiring designs of what a futuristic world could look like (as you’d expect, with jet packs and the like), and, yet more unfortunately, quite a bit of sciencey tech-like jargon – some of which flew right over my head!

One of the things I loved, and it’s a pretty simple one really, is that they designed Tomorrowland to look like a futuristic, space-aged Cinderella’s castle! Another concept of the film that I liked and was fairly comical, were the robots that were constantly chasing George Clooney (aka older Frank), Britt Robertson (who plays Casey Newton) and Raffey Cassidy (who at the young age of 12, gives a stellar performance as Athena), in an attempt to stop the trio from reaching Tomorrowland… they of course failed!

One of the things I most liked about the film, is the constant underlying messages that are subconsciously emphasised throughout, telling us (mostly) that we need to look after our planet, as it’s not going to last forever the way it’s currently being used. Young Frank Walker says wisely during his (unfortunately unsuccessful) World Fair pitch, something along the lines of “Inspiring people makes the world a better place. I’d feel anything’s possible if I saw people flying with a jet pack over me” and I felt that it was a great way to show kids to be optimistic, believing that they can achieve anything if they put their mind, and heart, into it. But I think the character who was given the most poignant messages to deliver was Hugh Laurie’s character, as towards the end he (in my opinion) spoke some home truths that some people prefer not to accept or even acknowledge. He was explaining how we as a human race create so many fictional books and films that feature the “end of the world theme” but even then, we fail to realise that this is a very possible future for our planet and not just fantasy. As he references in the film we are shown so many warning signs, such as the glaciers and ice caps melting, species becoming extinct, the changes in the climate, drought etc, but we continue to turn a blind eye. We see it as the future is far in the future… as if there’s nothing we can do about it now. There’s everything we can do about it now! A very poignant line that resonated with me is “how is it possible that we have an obesity crisis and starving people around the world at the same time?!” And I quite frankly (pardon the pun) couldn’t agree more! It’s the same with poverty and people without money, yet we have football players receiving an obscene amount of money to play a game?! Consider my mind well and truly boggled.

I’d say the only downside (which of course I’d need to watch again for verification), is that I think I spotted a continuity error in the film. If you don’t want to know any spoilers before you see it, then stop reading… right now… stop! But, in the famous scene regularly featured in the official Tomorrowland trailers, where Franks house is under attack by the crazy cyborgs we see Frank clamber into the bath tub first to sit on the left and Casey squeeze in after him, now sitting/laying squished in the tub on the right. However, after the //newly-formed-rocket-ship is catapulted from the house, it lands in the river. As the roof comes off, we see Frank climb out of the bath from the righthand side and Casey is lying in the left side of the now-boat. They’d somehow managed to switch sides in the space of 30 seconds… and in the small confinement of a one person bath tub!

I hope you’ve enjoyed reading my review and I’d just like to leave you with this last thought, as I feel that we really need to ask ourselves this every now and again – “What if there is a place; a secret place where nothing is impossible. A miraculous place where you could actually change the world. You’d wanna go?”. Think about it… I mean really think about it. Don’t you feel like this place is now? As we have the ability to change the future of the world. Right here. Right now. So what are you going to choose?

This post was written as a result of being invited to visit as press whilst I was working at NG Kids Magazine. All images my own.

☕️ I’ve decided to take a little break from social media so that I can spend the time I need to fully plan all of the exciting things I have in store for the upcoming year.
🤔 Do you know why their call is known as a 'saw'?⁠
🍋 Meet the swimming lemon!⁠
🎬 What action will you be taking today?⁠
🌊 Does everyone look like this on their first swimming lesson?⁠
👂 Tell me anything... I'm all ears!⁠
🥑 Thank sloths for avocados! ⁠
✍️ Do you know your writing style?⁠
🤔 Do you salute magpies, too?
🤔 Their tails reach up to 51cm in length but do you know what they can do with them?⁠